Io is a Revenant, Attendant and companion in Code Vein.

Io is the Attendant of the Successor of Blood, intended to serve the Protagonist in their struggle until the day they die.

However, Io began to question her role as Attendant and the meaning of her own life, soon thereafter seeking out truth of her existence with the help of the Protagonist.

As the two uncover her past, she discovered that she, like the other Attendants, was created through a manifestation of Cruz Silva's sheer thoughts and desires, chosen to be a retainer of the Successors, those who would soon bear the immense burden of her blood.

When the Queen was defeated by the Protagonist at the end of Operation Queenslayer, her will spawned several revenants, born for the purpose of looking after, guarding and being a constant companion to their assigned Successor. These were the Attendants of the Successors. Shortly after her birth and assignment, Io, Attendant of the Successor of the Blood, lost a large portion of her memories due to undisclosed circumstances. Knowing nothing more than her name and the fact that she was unable to locate her charge, she immediately set off after them. Over an unspecified period of time, Io scoured the land alone in search of the protagonist, enduring numerous battles and constant peril before finally rescuing them from the brink of frenzy at the bottom of a ravine.

From then on, Io strives to stay by her Succesor's side, aiding them greatly on their journey as they helped each other recover their memories, as a result regaining her sense of self and through her new experiences, forging her own identity.

Due to being made in the image of Karen Amamiya, with the exception of her face which is similar to her creator's, Io derives a few physical similarities from the late nurse. Despite being only 165 cm tall, Io's large breasts, slim waist and full hips make for a pointedly hourglass figure, with her cream-colored skin and lightly tousled hair tying off the similarities between her and Karen's appearance. From there, Io's own physicality diverges considerably, her hair taking on an almost ethereal, moonlit, silver hue. In addition to her curvaceous form and silver hair, Io's bright, wide-eyed amber gaze is one of her most recognizable features. While she shares this same doe-eyed look with Karen, Io's eyes stand out not only for their color, but the slightly weary, yet knowing look they often carry.

As an Attendant of a Successor, Io's uniform consist of a normally shimmering, backless white gown, drawn snug over her figure and sporting a partially ripped, plunging neckline. Highlighting her outfit are the various accessories and trinkets adorning her figure. On her pointer and middle finger are clasped two webbed, silver claws, while around her left forearm, she ties four white bracelets, each strung through a set of gold beads, with a much larger string of similar adornment resting gracefully on her hips. She also wears a necklace of the same style, a deep gold, teardrop shaped gem strung around a white lace and hanging just above her breastline. Completing her uniform are a set of intricately designed embroideries, the floral white pattern splayed over her left bicep and woven elegantly into her undergarments before finally breaking off and pattering itself around her right thigh.

While in the field, Io wears a custom Ivy-type Blood Veil styled in a shape of a short, black and violet, hooded cloak adorned with various golden laces, jewels and protrusions. In addition to her blood veil, Io wields an imposing polearm named Dammerung and wears a full-faced Purifier Mask, all standard issue among the Attendants. Unlike her fellow Attendants, however, Io's eyeshield is broken and her gown is not as pristine, having lost most of its luster with the dust and dirt staining the front of her skirt betraying the struggles and hardships she went through simply to find her Successor. In theme, Io wears around her right forearm a set of white claps fastened in place by golden studs and a bandage that she keeps wrapped around her left leg, both relics of long since healed injuries, possibly still worn as a sign of penance.

Io, like the other Attendants of the Successors, was created by Cruz Silva in the image of Karen Amamiya, Cruz's own attendant and caretaker while she was hospitalized during Project QUEEN. Following her frenzy, transformation into the Queen and subsequent defeat at the hands of the Protagonist, Cruz's remaining will that crystallized as vestige spawned the Attendants in order to ease her Successors' pain and suffering, just as Karen did for her. As such, Io has some general surface-level traits in common Karen Amamiya, including aspects of her temperament.

Regardless, Io is a rather divergent identity when compared to her inspiration. As a result of losing her memories, her persona strays even further as she constantly searches for her own identity, her disposition betraying an apparent unassuming innocence alongside a stoic dedication to the vague sense of purpose in her heart. This would lead her to find the Protagonist after the defeat of the Queen and bring them back from the brink of frenzy, having apparently forged on through injury, selflessly fighting hordes of Lost alone just to find and keep them safe.

While appearing very meek, reserved and generally introverted around most people, Io brazenly comes to the fore when the Protagonist and matters concerning the Successors of the Queen are concerned, from the beginning of the game taking charge with an uncanny cool in the most chaotic and unprecedented of situations, stepping in to save the Protagonist's life, lead them through critical tipping points throughout their journey and saving the lives of their comrades as a result.

Despite the almost unaffected cool with which she carries out her duty and her innocently aloof countenance, Io's kind and caring, yet unsure and fragile nature are palpable in the incredibly tender and silently intimate relationship she and the Protagonist share with one another. When alone with them, Io tends to speak on end for much longer than usual, sadness, relief or anxiety apparent on her face as she freely and vulnerably lays out her heart, revealing her many insecurities, concerns and desires to the Protagonist and in turn, comforting them in their most trying of times, allowing them to lean on her whether emotionally or physically, with tender caresses or steady words of encouragement.

Io in a snowy area of the game.

Io using one of her Gifts.

Io with her mask over her face. 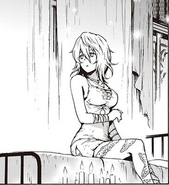 Add a photo to this gallery
Retrieved from "https://codevein.fandom.com/wiki/Io?oldid=4612"
Community content is available under CC-BY-SA unless otherwise noted.